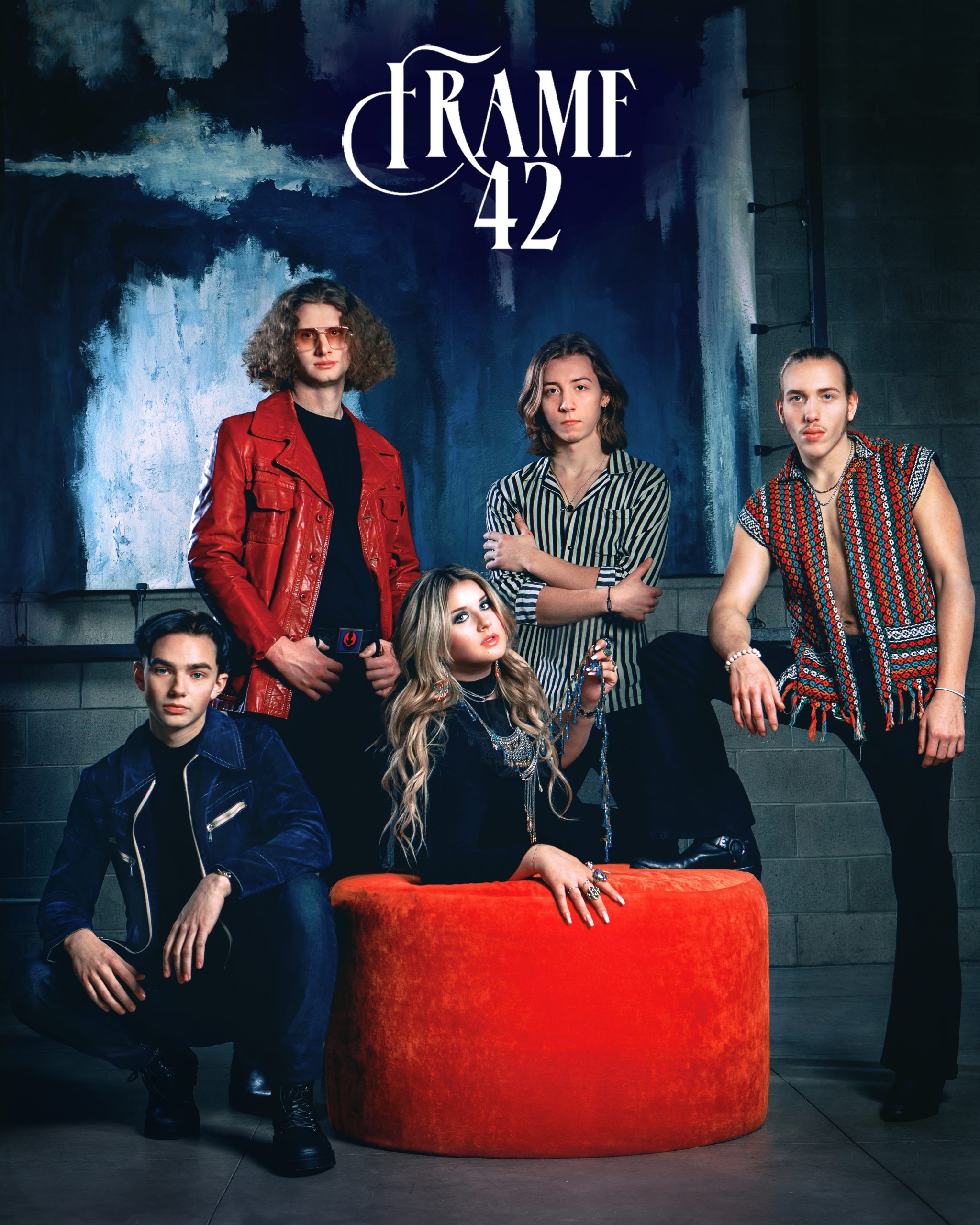 The ticking of time keeps a steady pace, moving quickly especially when it comes to life, music, and trends throughout history. Every era is characterized by a feeling, a vibe that catapults us back to specific moments. Music can transport people back to an event from their past; evoking emotions that spark
memories.

Formed in 2017, Frame 42 is a 5-piece hard rock band that imbues the modern Gen Z mentality; offering vintage rock sensibilities with powerhouse melodies. The group represents the emerging voice of a Generation who are learning how to navigate the new normal in a post pandemic world.

In 2019, legendary music producer, Toby Wright (Korn, Sevendust, Alice in Chains, KISS, Sevendust) took the group under his wing because he felt their talent was undeniable and deserved to be harnessed. “Frame 42 is one of the most talented bands I’ve ever had the pleasure to produce. Their musical
abilities outshine their youth. Ava Morris is an exceptional talent, her voice rivals all of your favorite singers,” says Producer, Toby Wright.

Hailing from Lapeer MI, the talented group is creating their own brand. They are working toward their collective passion for music and entertainment and taking control of their future while they’re still in their teens. “The band moves in unison, we make every decision as a team and are lucky to be able to do that,” says Ava Morris who has been performing since she was a young child. “I have an upright piano in my living room that I loved to play when I would visit my Grandmother. That piano is an inspiration to me to keep moving forward. One of my main influences is The Beatles, they are a driving force for me to stay focused on my songwriting,” explains Ava.

Each member brings their own unique perspective to the creative process. “Lucas brings funk, Brock brings metal and Michael brings hard rock. Ben evokes a southern folk vibe, and I bring folky lyrics with classic melodies,” explains lead singer, Ava. “We write all of our original music as a group, that’s how most of our songs come to life. The main thing that inspires me is to become better as a musician, to reach the level of the artists that have inspired me,” says guitarist, Michael. “An important factor in the band’s identity is that we function as a family. Instead of functioning like co-workers, we’re all friends so we are able to spend time together as best friends who love making music,” adds bassist, Brock and rhythm guitarist, Ben. “That is the key factor in us staying happy as a band, and it shows in the music as well. In order to consistently make music, we have to all be in a good place with each other and communicate like a family,” says drummer, Lucas.

Frame 42’s debut single, “Thicker Than Blood” is based on relationships and how it feels when it ends. “It may be harder for one person to let go than the other. Love is definitely thicker than blood; you can lose somebody and still hold on to love,” says Ava.

The self-titled album was recorded at BigBlock Sound Studios in Linden Michigan in December of 2022. It was produced/engineered by Toby Wright. The new single, “Thicker Than Blood” will be released February 14, 2023. It will be followed by an EP release in early May of 2023.

As Generation Z comes of age, these fresh-faced young adults are changing the narrative on how to live happier, less stressful lives by doing things differently from their predecessors. Working 9 to 5, chained to a desk is a thing of the past and Gen Z is pushing that forward as we approach the next
level of the digital age.

The group represents an emerging voice of a new generation who are learning how to navigate the new world paving the way toward creative fulfillment, success, and good mental health. As time keeps slippin’ into the future, Frame 42 is hard at work representing the next generation of musicianship, work
ethic and comradery